Cases Of Cure By High Potencies.

THE true physician must be possessed of delicate conscientiousness; a conscientiousness that precludes hasty judgment of facts that at first sight appear incredible. He must be honest with himself; ready at any time to accept, or at least investigate, before discarding facts or propositions that may present themselves.

I would ask my readers to lay aside prejudice and pre-conceived ideas regarding potencies; and would further ask that they procure some of the most extreme potencies mentioned in the following cases, and test them for themselves. I think I can safely predict a larger percentage of cures and a greater degree of satisfaction for all who will honestly and capably use the most extreme potencies in their practice.

I.—Lucy M., age 26; tall, slim, light hair, blue eyes, light complexion; very talkative, so much so that she becomes much excited as she relates her symptoms; hasty, vehement speech. On awaking from first sleep of about an hour’s duration has the following symptoms : —A broad belt of pain, five or six inches wide, which extends around the abdomen, extending from back and meeting on abdomen. Pain, aching in character, and very severe. Mentally gloomy in evening, and on awaking with pain. Tongue broad, trembles as it is protruded. Lach. Cm m (Swan). One dose removed the whole train of symptoms the first night.

I use his own words : “There seems to be a fullness in my throat; seems as though something had lodged there. A slight wheezing when I draw a full breath. There seems to be a slight pressure on my left breast, and occasionally a hot, smarting sensation.” Apis. 10m m (Swan), three doses, repeated only as an aggravation occurred, removed these symptoms in a few days. 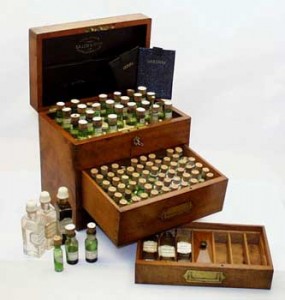 IV.—Mrs. McM. Sensations as if a stick extended from throat to left side of abdomen, with a sensation as if the stick had a ball on each end. Kali Carb. Cm (Fincke), one dose cured.

I could add many more cases, but think the above sufficient to illustrate the point I particularly desire to impress, namely, that when a remedy is thoroughly indicated, and on application you get no response, or but a slight relief, it is often necessary to go higher and higher. In the above cases the Cm failed to produce any effect in each case (except in case 4), and had I done as is so often done, changed the remedy, instead of varying the potency, I should have failed. I recently cured a case of early morning diarrhea with Sulph. 2m q where the 10m m had failed.[1]

It is sometimes necessary to go lower, but I am convinced that this is the exception, not the rule.

In testing high potencies, I deem it of great importance never to repeat the remedy as long as improvement continues.

A PECULIAR SYMPTOM REMOVED BY LYCOPODIUM.

A patient of mine, who had an attack of childbed fever, complained of the following symptoms, which were, with all the other symptoms, promptly removed by Lycopod. 10 m : ‑

It feels as though hot balls dropped from each breast through to back, rolling down back, along each leg, and dropping off heels.

This sensation alternated with a sensation as if balls of ice followed the same course.

This symptom had been present ten hours, disappearing in a few minutes after the first dose of Lycopodium 10 m.

[1] We presume that “2 m. q ” means the two thousand quadrillionth centesimal of HAHNEMANN. Will Dr. Jackson inform us how this remarkable attenuation was arrived at, as we have no faith in the possibility of reaching it in time.—Editors