First reason for being a homeopath 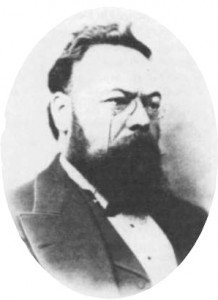 We never get tired of reading Burnett ! I have great admiration for this English physician who published a number of booklets like this. It is always striking to note with what honesty he talks about his failures, his trial and error, confirming that mistakes are what makes us learn and progress. His clinical approach was sometimes somehow unorthodox, but the least we can say is that he had very good results.
Brunett is a model for us both on the professional and moral level. We publish here the first 9 reasons. EB

It is indeed shorter and easier to proceed from ignorance to knowledge, than from error. They who are in the last must unlearn before they can learn to any good purpose: and the first part of this double task is not in many respects the least difficult. BOLINGBROKE

A number of years ago, on a dull  dreary afternoon, which I had partly occupied at B Hospital with writing death certificates, I suddenly rose and  felt something come over me, for the  fiftieth time at that period. I hardly knew what, but it grew essentially out of my unsatisfactory clinical results. I had been an enthusiastic student of medicine originally, but an arrantly sceptic professor quite knocked the bottom out of all my faith in physic, and overmuch  hospital work and responsibilities, grave  beyond my age and experience, had  squeezed a good deal of the enthusiasm  out of me.

After pacing up and down the c surgery, I threw myself back  into my chair and dreamily thought myself back to the green fields and the early  birds’ nesting and fishing days of my  childhood. Just then a corpse was carried by the surgery window, and I  turned to the old dispenser, and enquired  in a petulant tone, ” Tim, who’s that  dead now ? ” “Little Georgie, Sir.”

Now little Georgie was a waif who belonged to nobody, and we had liked him, and had kept him about in odd beds, as one might keep a pet animal. Everybody liked little Georgie; the most hardened old pauper would do him a  good turn, and no one was ever more  truly regretted than he.   It all came about in this way: One day I wanted a bed for an acute case,  and I ordered little Georgie out of his  bed in a warm, snug corner, to another that was in front of a cold window ; he  went to it, caught cold, had pleurisy, and  Tim’s reply gives the result.

Said I to myself: If I could only have stopped the initial fever that followed the chill by the window, George had probably lived. But three medical men besides myself had treated Georgie — all  in unison — and all hospital men; still  pleurisy followed the febricula, dropsy  followed the pleurisy, and poor little Georgie died.

Old Tim was a hardened man, and I never saw him show any feeling or sentiment of any kind, or regret at anybody’s death, but I verily believe he was very near dropping just one wee tear over Georgie’s memory,  for I noticed that his attention was needlessly and unwontedly fixed on the  surface of the bottles he was washing.  Be that as it may, Georgie was no more, and I FELT SURE HE NEED NOT HAVE DIED, and this consciousness nearly pressed me down into the earth.   That evening a medical friend from the Royal Infirmary turned up to dinner with me, and I told him of my trouble and of my half determination to go to America and turn farmer: at least I should be able to lead a wholesome, natural life.  He persuaded me to study Homoeopathy first, and refute it, or, if apparently true, to try it in the hospital.  After many doubts and fears — very much as if I were contemplating a crime  — I procured Hughes’s “Pharmacodynamics” and “Therapeutics,” which my friend said were a good introduction to Homoeopathy.

I mastered their main points in a week or two, and came from a consideration of these to the conclusion either that Homoeopathy was a very grand thing indeed, or this Dr. Hughes must be a very big ….-No, the word is unparliamentary. You don’t like the word? Well, I do, it expresses my meaning to a T; on such an important subject there is for me no middle way. It must be either good clear God’s truth, or black lying. A fool the man could not possibly be, since it would be quite impossible for a fool to write the books.  And as he seemed to speak so eloquently from a noble soul, it lifted me right  out of the slough of despond — for a little while, but then came a reaction: had I  not often tried vaunted specifics and plans of treatment, and been direfully disappointed ? So my old skepsis took possession of me. “What,” said I,  “Can such things be?” No, impossible.  I had been nurtured in the schools, and had there been taught by good men and true that Homoeopathy was therapeutic Nihilism. No, I could not be a Homoeopath; I would try the thing at the bedside, prove it to be a lying sham, and expose it to an admiring profession!

I was full of febricula on account of Georgie’s fate, so studied the say of the Homoeopaths thereon, and found that they claimed to cut short simple fever with Aconite. Ah, thought I, if that be true, Aconite would have saved little Georgie if given in time at the very onset.

Well, feverish colds and chills were common enough just then, and I had moreover a ward where children thus taken ill were put till their diseases had declared themselves, and then they were drafted off to the various wards, for that purpose provided, with Pneumonia, Pleurisy, Rheumatism, Gastritis,  Measles, as the case might be.

I had some of Fleming’s Tincture of Aconite in my surgery, and of this I put a few drops into a large bottle of water, and gave it to the nurse of  said children’s ward, with instructions to administer of it to all the cases on  the one side of the ward as soon as  they were brought in. Those on the other side were not to have the Aconitic solution, but were to be treated in the authorised orthodox way, as was theretofore customary.

At my next morning  visit, I found nearly all the youngsters  on the Aconite side feverless, and mostly at play in their beds. But one had the Measles, and had to be sent to the proper ward: I found Aconite did not cure measles [Hahnemann in his Materia Medica Pura 1834, under the chapter about Aconite tells us, “in measles, in purpura miliaris, and in the acute pleuritic fevers, c., its curative power is marvellous » so clearly Mr. Burnett was just making his first baby steps.]: the others remained a day or two and were then returned whence they had originally come.

Those on the non-aconite orthodox side were worse, or about the same, and  had to be sent into hospital — mostly  with localised inflammations, or catarrhs,  measles, &c.   And so it went on day after day, day after day: those that got Aconite were  generally convalescent in twenty-four or  forty-eight hours, except in the comparatively seldom cases where the seemingly  simple chill was the prodromal stage of  a specific disease such as measles, scarlatina, rheumatic fever: these were barely influenced by the Aconite, But the great bulk of the cases were all  genuine chills, and the Aconite cured the  greater part right off, though the little  folks were usually pale, and had perspired, as I subsequently learned, needlessly much. [Indeed, contrary to what we read in various publications, which are often pale copies of the other copies, which maintain that Aconite is only indicated when the skin is dry, and that it stops being indicated as soon as perspiration appears, while Hahnemann clearly says regarding Aconite: “Perspiration with febrile rigor, » – « Sour smelling perspiration all over the body. » « Transpiration and sweat all over the body. »… ]

I had told the nurse nothing about the contents of my big bottle, but she soon baptised it “Dr. Burnett’s Fever Bottle.”   For a little while I was simply dumb-  founded, and I spent much of my nights  studying homoeopathy : I had no time  during the day.   One day I was unable to go my usual rounds through the wards; in fact I was absent two days — from Saturday till Tuesday — and on entering the said children’s ward the next time in the  early morning, the nurse seemed rather quiet, and informed me, with a certain forced dutifulness, that all the cases might, she thought, be dismissed.

” Indeed,” said I, ” How’s that?”“Well, Doctor, as you did not come round on Sunday and yesterday, I gave your fever medicine to them all; and, indeed, I had not the heart to see you go on with your cruel experiments any longer; you are like all the young doctors that come here — you are only trying experiments!”  I merely said ” Very well, nurse; give the medicine in future to all that come in.” This was done till I left the place, and the result of this Aconite- medication for chills and febricula was usually rapid defervescence, followed by convalescence.

But when the stomach was much involved, I at times found the Aconite useless, unless vomiting occurred, and so in such cases I administered a mild emetic, whereupon defervescence at once set in, and though a homoeopath now for a good many years, I still think a mild emetic the right treatment when the stomach is laden and cannot unburden itself by natural vomit.  But still this is only by the way: I enter into all these preliminary, incidental and concomitant circumstances merely to put you on the same ground whereon I myself stand; they are not essential, for they only lead to this:  Aconitum in febricula was, and is, my first reason for being a homoeopath. Have you as good a reason for being  a “regular” ?