From time to time, works are issued from the Homœopathic Press which, after a short period, become forgotten, either from the fact that the special circumstances which called them forth no longer exist, or that the intelligent portion of the profession and the public have discovered that their homoeopathicity is limited to their title-page, after which discovery they sooner or later sink into deserved oblivion. Nevertheless, in these forgotten volumes there are occasionally one or two really good clinical cases, or provings of medicines, which should not be lost. We therefore purpose, under the above heading, to collect from these works whatever may add to our Materia Medica. The reader may understand that, under the name of each work, we have extracted (unless otherwise stated) all the original matter that we consider of value in this direction. 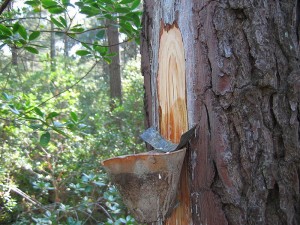 Case 1. Mrs. —, affected with haematuria to a remarkable degree, for four days, was ordered 1/12 drop of Turpentine every four hours. In twenty-four hours the sanguineous appearance was quite gone, but much irritability of the bladder, pains in the region of the kidneys, and shootings from that region down the limbs, made their appearance. Several weeks afterwards she had a return of the disease to a considerable amount, owing to indiscretions in diet, and took 1/100 drop of Turpentine every few hours. It took five days entirely to remove the morbid state, but there were no painful consequences. (p. 239.)

8, twice a day, for chronic constipation. Soon after commencing it, she began to feel extremely weak, sleepy all day, headache all over the forehead, a creeping or trickling feeling in the lower limbs, extremely cold feet, cold sensation in the chest, and extreme exhaustion. She continued the medicine for four days, when her symptoms became so alarming, that another physician was sent for, who declared her to be suffering from overdoses of Strychnia. (pp. 239-40.)

Case 3. An old lady took Mercurius Solubilis 6, every four hours, for a swelling over the nose. In two days the mouth began to be affected, and as well marked an instance of mercurial stomatitis, with loosening of the teeth, purple margins of the gums, salivation and faator, set in, as 1′ have ever witnessed. She had before been salivated by the 6th dilution. (p. 240.)

Case 4. A gentleman, aged 75, had for fifteen or sixteen years been affected with a scaly eruption on the legs; on a dark, dusky redness of the skin. It occasionally improved, but never disappeared, and had been for five months in a very bad state, when he was ordered Sepia 30. After one dose, he became affected in the course of the day with so great a sense of exhaustion as to be unfit for any exertion, and so to alarm his family, that he had stimulants given, and took no more of the medicine. In a week a sensible amendment was observable in the limbs; in a month the redness was gone, and nothing remained of the eruption but a white and furfuraceous desquamation, which gradually disappeared also. Four years afterwards, the skin was ascertained to have remained perfectly well. This sense of prostration is often noticed when the medicines are suited for the diseases for which they are prescribed, and nothing surprised me more in my first experiments than the degree to which it sometimes went. (pp. 240-1.)

Case 5. Not long ago, a gentleman who had taken a quantity of Turpentine in allopathic doses, for the cure of an obstinate rheumatic sciatica, became affected with iritis and I think most likely in consequence of his having taken the Turpentine. (p. 248.)

[NOTES—We consider the last observation of great importance. We hold that whenever the Allopaths make a brilliant, complete, and permanent cure of a severe disease, it is because they have used a Homoeopathic remedy, disguised sometimes under the name of a “specific.” For a long time Chlorate of Potash has been regarded by the Allopaths as a “specific “for certain forms of stomatitis, and behold the Allopaths themselves have lately testified to the fact that it causes stomatitis. Turpentine has long been used by them as a “specific” for iritis, curing even after Mercury had failed. We now see the reason; it is homoeopathic to certain forms thereof. Extended provings of this valuable remedy will doubtless show in what particular cases of iritis it is to be given, according to the symptoms of each individual case.]