No initial aggravation, the patient claims to be better, but he is not. (mirroring observation 20 and 21 mostly). 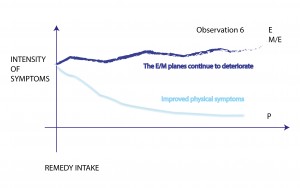 Levels: A and B, and below.

Diagnosis: partial prescription. In high levels of health, you would have prescribed a simile. In low levels of health with an indistinct picture, this is a normal situation that often requires switching to another drug (zigzag cure, see §167 and 168).

In this situation, the apparent lack of reaction on the emotional and mental plane should draw your attention. The new dosage may well limit the reactions, but here you can see that only a small group of local symptoms was amended while visibly the dose had no effect on the overall energy of the patient.

This is the “zigzag ” cure Kent talked about. This scenario is common in defective cases where even the best homeopath in the world cannot perceive a significant totality, it is the case of Vithoulkas’ Group C or even D. However, this also may occur with beginning homeopaths who are not able to perceive the totality and find themselves obliged to use a succession of several drugs where a master would have used only one. The concept of consecutive remedies debunks once and for all the illusion of the “perfect” and “ideal” remedy that would cover a case throughout life. This static vision produced a generation of homeopaths who are constantly struggling to find ever new remedies, in search of an imaginary Grail, while a succession of polychrests would have carried their patient into health.

In group A or B patients, such scenario means that your anamnesis was not well taken. Your prescription would only add to the confusion if you carry it on. It is best to stop any intake and retake the entire case.

In patients belonging to low health levels, you should be pleased with this result. It is through a succession of nearly similar remedies that one day their organism, having acquired enough energy, would react in the form of an acute episode. They may not reach 39° in temperature, but these acute conditions, which are nothing but a flare up of the chronic underlying condition, should be seen urgently. They offer you a view into the internal state of affairs; it would be a shame to miss them.

Always in these low health level patients, such result may come up after the prescription of an antimiasmatic .

Compare this reaction with its inverted image in observation 21, where a Group B patient witnesses a marked improvement on the E/ME planes, while a small group of physical symptoms are considerably worse.