During the 1918 epidemics, people were prescribed with 8 to 35 g/day. Our allopathic brethren have a curious inclination to forget that certainly aspirin contributed greatly to the mortality level of the flu. Then the Editors discuss what is homoeopathy, especially a beautiful refutation of organotherapy and other twists. E. B.

1878, July, August.— Dr. J. C. Burnett quotes a case of rheumatic fever where large doses of Salicylic Acid, prescribed by an Allopath, caused sudden violent pain in epigastrium and sudden death. If this should ever occur in the practice of a “physician practising Homoeopathy”, which is very likely from all we read, we beg in anticipation to disclaim such treatment. Dr. S. H. Blake utilizes the fact recorded in the Lancet, 1877, Oct. 27th, that this Acid and Salicin caused necrosis of the bones of legs and forearm, and gives Salicylic Acid 1X in a case of chronic caries of foot, with benefit. 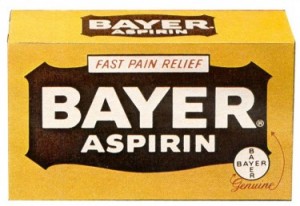 We hope that no “generalization” will follow this announcement; it will only cure those cases to which it is homœopathic by virtue of the correspondence of the totality of the symptoms. The August number commences with an editorial reply to Dr. Ross’s paper in the Practitioner, “Are there Laws of Therapeutics?” the avowed object of which is to correct Dr. R.’s errors with regard to Homoeopathy. Yet some of his errors, so far from being refuted, are really confirmed.

Dr. Ross objects to HAHNEMANN’S theory as to the action of the Homoeopathic remedy; and the editors regret this theory also. How long will both avowed friend and avowed foe run their heads against HAHNEMANN’S theories? The latter attack him on account of them; the former apologize for them, as for something of which they are ashamed. When will they both read and understand his Organon, and find (section 28) that he gave this theory merely as “the most probable view”, and after all one which “matters little?” So little indeed, that afterwards, in his Chronic Diseases, he gave a different theory.

What do his theories matter if we have known his facts to be genuine? Either of these theories may be true, or both may be untrue; personally, we have a very different one of our own, which may also be true or false, but our practice is nevertheless modeled on that of HAHNEMANN, and is not affected by theories. Again, why object to HAHNEMANN’S “theory of dynamization?” The fact is admitted by the editors that potencies often cure where the crude drug fails; this is dynamization, or development of curative power. HAHNEMANN’S statement of dynamization by dilution and succussion is not a theory, but a fact established by experience; a difference of opinion as to how curative power is thus developed would not destroy belief in the fact; nay, it would presuppose the fact.

The same remark applies to what they call his “psora theory.” Dr. Ross avows his belief that “one or two of the principles lying at the foundation of this system are substantially true. These principles are what may be briefly termed the local action of medicines, or the elective affinities of the tissues, the double action of medicines, and the opposite effects of large and small doses.”

To this the editors respond, “This passage when expanded reads as follows :—

(2) One drug differs in action from another, in as far at least as is manifest to our observation, in the symptoms produced on its elective organ or tissue.

(3) Medicines have two actions which are opposite to one another, and these two are the result of the administration of large and small doses respectively. When these principles are carried into practice, it is

(4) by giving small doses to counteract symptoms of disease which correspond to the symptoms produced by large doses of the same drug. This is homoeopathy pure and simple.”

According to this view, then, Dr. Ross, like M. Jourdain, who had talked prose all his life without knowing it, has been practising Homoeopathy in blissful ignorance of the fact. But, in our opinion, neither statement represents the true teachings of HAHNEMANN. Let us analyze these four propositions.

(1)This proposition is merely Rademacher’s idea, which was afterwards rehashed under the name of Organopathy. A reference to the provings is sufficient to refute it. It is true that many drugs have a more marked action on certain organs and tissues than on others, but so far as we can diagnose the organ affected, all well-proved medicines are found to act on every organ or tissue; and everyone who has superintended provings of a drug on several persons knows that the effect is not “uniform.”

(3) This is true also, but necessarily applies to a very limited class of symptoms, i.e., those which have an opposite.

(4) This is an imperfect statement, because many of our provings (the best, in fact,) are made with very small doses, and we find that small doses cure symptoms which equally small doses are capable of producing. Dr. Murray Moore gives a proving of the Oreodaphne Californica. Dr. M. took five drops of tincture, which caused confusion in head. After six hours he took ten drops, which caused dizziness, worse on stooping or moving about, followed by a dull pressive fronto-occipital headache, which passed off during the night’s rest. Olfaction of this tincture caused a similar more intense headache. On others, olfaction caused, almost invariably, an intense aching, with pressure at inner angle of orbit, right or left, generally the latter, but never in both simultaneously, extending through brain, and across scalp to base of occiput; it lasted from one-half to seven hours, worse from light, noise, or moving, and better for closing eyes and by perfect quiet.