In the American Observer, 1875, vol. xii, p. 305, I published a proving on myself, made with repeated doses of Sarsaparilla 1600 (Jenichen). Among its symptoms were the following : — 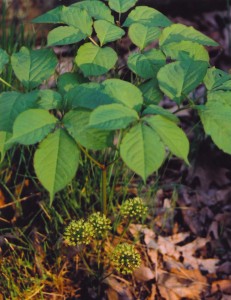 (1) When sitting on the seat, after stool, had a desire to urinate, but could not; afterwards, when standing, could urinate freely.

(3) Testicles and spermatic cords ache, and are tender to touch; the cords are much swollen, with a dragging-downwards feeling in them.

(4) Subsequently, I gave to a lady, about 40 years old, one dose of Sarsaparilla Cm. (Fincke). In seven days, having quite forgotten that she had taken it, the following symptom (which was quite new to her) occurred : —The urine only dribbles away when sitting, the bladder, when in that posture, feeling bent forwards upon itself; on standing, the urine passes freely; this lasted three or four days.

The above symptoms are new to Sarsap. Swelling of spermatic cords is found under Arnic., Berb., Chin., Kali., Phosph., Phos-ac., Puls., and Spong.; the urinary symptom, I have been unable to find under any other remedy.

Clinical confirmations.—(1) Mr. —has noticed, for nine months, a swelling of spermatic cords; when swollen, they ache, and are painful to touch; he has noticed this four times in the last three weeks; these symptoms occur when sexually excited by being in the company of women. I prescribed one dose of Sarsap. Cm. (Fincke). In five days the cords were well, and the same circumstances no longer affected them.

(2) Mr. A. C., suffering from chronic gleet, complained of the following symptoms : —For some time inability to urinate when

sitting; for a shorter period the testes had hung down, were heavy, and the spermatic cords swollen. I gave him one dose of Sarsap. Cm. (Fincke), which removed all these symptoms; those of the sexual organs, which were the most recent, disappearing first, according to Hahnemann’s law. (Chronic Diseases, vol. i., pp. 171-2.) The gleet itself required further treatment.

(3) Mrs. M., August 24th, about five months’ pregnant. For seven weeks had suffered from difficult urination when sitting, better when standing leaning forwards; worse for the last ten days. I gave one dose of Sarsap. Cm. (Fincke), which cured her at once. About the middle of October, it returned slightly, for one day; passed off without medicine, and, when last heard of (second week in November), there had been no return.

It has been asserted that Sarsaparilla is one of those medicines which must be given in large doses. The above cases prove the error of this statement. Sarsap., like all other medicines, will cure in a high potency, provided it is a simillimum to the symptoms of the individual patient.